Great news on a Saturday morning! 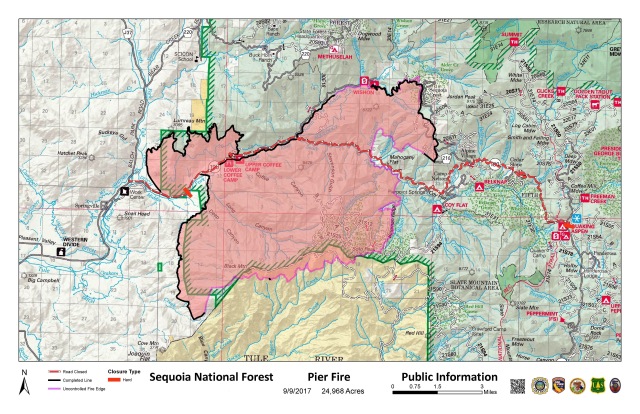 Cause: Human caused, under investigation

Announcement: This evening, September 9, starting at 6 pm there will be a community meeting at the Porterville College Student Center to update the public on the Pier Fire status, evacuations and road closures.

Fire Summary: Last night firefighters again made good progress along the fire’s perimeter. Crews patrolled and mopped up along the containment line on the western and northern portions of the fire. Additional firing operations from Rogers Camp towards Coy Flat increased and widened the perimeter line to keep fire from moving past it. Additional reinforcement and firing will continue today in those areas.

Firefighters will continue to prepare and improve line on the south edge of the fire on the Tule River Indian Reservation in preparation for a firing operation.

Fire suppression repair (impacts directly caused by firefighting efforts or activity) will begin today on the western and northern portions of the fire.

Weather and Fire Behavior: Low pressure will remain off the California coast over the next couple days. Winds will turn from southwest to a southeast direction over the weekend bringing monsoonal moisture into the fire area for a return threat of thunderstorms. Today’s maximum temperatures 85-92 below 3000 feet, 73-83 at higher elevations. Minimum humidity 23-29% below 3000 feet, 35-40 % at higher elevations. Winds will generally be upslope 3-6 mph gusting to around 15 mph after 1200. Surrounding ridges will see southeast to southwest winds 4-7 mph.

Evacuation Center: As of 8 pm last evening the Red Cross shelter in Porterville was closed, there were no longer any evacuees that were sheltered at that location.

Area Closures: Sequoia National Forest trails, roads, and lands around the Pier Fire are closed (Closure Order No. 0513-17-34, https://inciweb.nwcg.gov/incident/article/5548/39662/. CAL FIRE has closed Mountain Home State Forest, and Tulare County has closed Balch Park. All areas are closed until the fire is brought under control. Suppression repair work will take additional time after the fire is contained; recreationists should plan ahead.

Hard Road Closures: The following roads are closed to all traffic:

Cow Mountain Road at its intersection with Rio Vista Road.

Highway 190 north of Ponderosa is closed at Forest Road 21S50 to westbound traffic.

Information for the levels of smoke in communities affected by the Pier Fire; http://wildlandfiresmoke.net/outlooks/2017/Pier#Main

Dormant Brush, Hardwood slash, timber, including areas affected by tree mortality. Fire is located in a heavy timber mortality area. The southern portion of the fire is burning in a location with little to no recorded fire history.

Diminishing relative humidity recovery led to active surface fire in the heavier fuels at higher elevations. Isolated pockets of vegetation were creeping and smoldering throughout the day at lower elevations. Rollout diminished along steep terrain as fuels are consuming completely

A full suppression strategy is to be implemented on the Pier Fire. Values at risk associated with the incident include human safety, private property, and associated improvements, electrical power infrastructure, Giant Sequoia groves, and cultural values. Minimize acres burned on privately owned and tribal lands. Apply tactics on public lands that offer the highest probability of success.

The voluntary evacuation order for the Upper Rio Vista Area was rescinded today.